Today was a good day of fishing . I headed out with light winds and the temps in the 60’s . When I reached the bay the birds were diving and the trout were under em. I had Mr. Brad and his son Tyler from Tennessee fishing with me today. Who were some good guys and good fisherman. After chasing the birds till 9 am we had 77 trout and went look for some reds . At first we caught a few nice 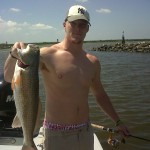 drum and some small reds but later found some good reds in the 16-24″ range we caught 17 reds . All the fish were released to be caught another day. I had a great time guys Thanks for the fun day of fishing and I hope to see 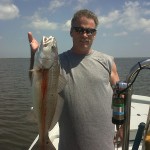